Hydrogen could be key to delivering ‘Net Zero’. As Sembcorp Energy UK develops Wilton International’s decarbonisation strategy, we ask: ‘where does H₂ fit in?’

A successful hydrogen economy is an important part of the UK Government’s plan for a ‘Green Industrial Revolution’. But what could this mean for major industrial sites like Wilton International in Teesside? And how can site operators respond to the challenges this presents? We spoke with Natalie Lowery, Strategy Manager at Sembcorp Energy UK, to learn more.

“Hydrogen is likely to be a key piece of the decarbonisation puzzle,” says Sembcorp’s Natalie Lowery. “Government, National Grid (NG), the Committee on Climate Change (CCC) and many others agree that hydrogen is needed to reach Net Zero, and internationally big commitments are being made to it.

“In the UK, the Government’s 10 Point Plan for a Green Industrial Revolution sets a target for 5GW of low carbon hydrogen production capacity by 2030, which they’re supporting with a range of measures including a £240 million Net Zero Hydrogen Fund. There are certain “hard to treat” areas, like heavy transport, where few other options for decarbonisation exist. As a company, we’re currently considering what part we can play in the hydrogen economy in the short, medium and long term.”

But the hydrogen must be sustainably produced

“According to The International Energy Agency, this process is responsible for about 830 million tonnes of carbon dioxide per year, which is equivalent to the CO2 emissions of the UK and Indonesia combined.

“In order to show the sustainability of its production, hydrogen is categorised by colour. Grey hydrogen is produced by SMR and brown from industrial processes.  Blue is produced by these two methods but with capture of the resulting carbon dioxide, and green is produced using electrolysis and renewable energy.

“In the UK it’s generally accepted that we will need blue hydrogen in the medium term, whilst building the capacity to produce enough green hydrogen. At present, brown hydrogen is produced at Wilton International. However, with carbon capture and storage this could become blue hydrogen, and the site would also be an ideal location for an electrolyser to produce green hydrogen.  Teesside has attracted a number of projects in different sectors and we’re keen to support the development of a thriving hydrogen economy in the region.”

When electricity isn’t the answer: trucks, trains, ships and even planes

“An example of a key area where hydrogen may be needed to achieve Net Zero is heavy transport.” says Natalie.

“There are major government-backed research projects and trials using hydrogen as fuel for HGVs, trains (in non-electrified areas) and shipping, as well as research into whether it has a role as fuel for aircraft.

“The Government is also investing in R&D into the infrastructure upgrades required at airports to move to battery and hydrogen aircraft.  Here in Teesside, major funded projects include two hydrogen refuelling stations and a project to convert a fleet of passenger trains to run on green hydrogen. With rail sidings on site, proximity to Teesport and road and pipeline links throughout the Teesside industrial cluster, Wilton International would be an ideal location for facilities to support these kinds of uses”.

“Another possible good use for hydrogen is balancing the electricity grid for longer term and seasonal storage, particularly if co-located with renewable power,” Natalie explains.

“For example, when excess energy is produced by wind turbines or solar farms it can be used to power an electrolyser and the resultant hydrogen stored. When there is a need for more power, the stored hydrogen can power turbines to produce electricity to feed into the grid.  As energy producers this is something we are very interested in”.

Heating homes with hydrogen instead of natural gas

“The Gas Goes Green programme is running a number of projects to investigate the possibility of repurposing the UK’s gas network for transportation of 100% pure or blended hydrogen,” Natalie says.

“Although alternative technologies do exist - heat pumps and heat networks - there are some compelling arguments for this as an initial use case. Not least the fact that we already have an extensive gas network undergoing an iron mains replacement programme, which could make it suitable for hydrogen.

“There are a number of projects trialling the replacement of natural gas with hydrogen, including here in the North East of England. If they’re successful, there will need to be considerable investment in hydrogen generation across the UK.  Wilton International, with its existing hydrogen infrastructure, private wire electricity, and proximity to a centre of population would be an interesting location for generation facilities.”

And industry is gearing up to play its part

“Businesses in carbon-intensive sectors are evaluating how they can use hydrogen to decarbonise, and manufacturers are gearing up to provide 100% hydrogen turbines,” Natalie says. “Siemens, for example, who have committed to developing a hydrogen turbine by 2030.”

“The Government is committed to funding testing of hydrogen for industrial clusters through the Industrial Energy Transformation Fund, and the expected Hydrogen Strategy will be used to understand if there are any gaps in support.” 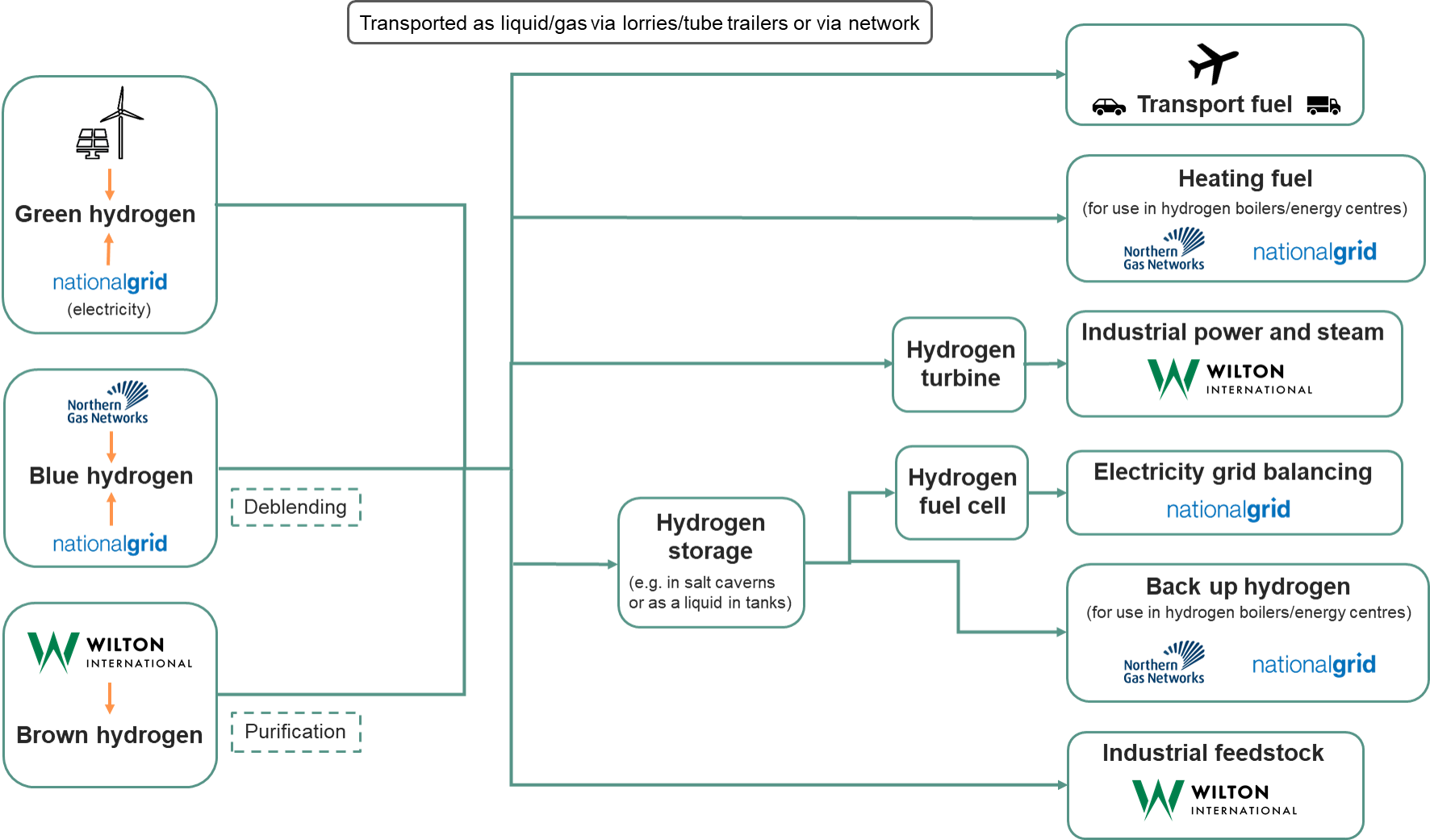 “Sembcorp is fully committed to decarbonising the Wilton International site and to supporting the local and global journey to Net Zero.  The way forward isn’t yet entirely clear, but If the demand for clean hydrogen is there, the Net Zero Teesside Carbon Capture and Storage project could enable Sembcorp to be pioneers in the production of blue hydrogen at Wilton International.”

“Wilton International would also be a great investment location for companies looking to move into the production of green hydrogen,” Natalie says.  With Teesside offering the UK’s only existing hydrogen network, and 60% of UK hydrogen being produced in the region already, Wilton International is well placed and willing to play a strategic part in the future hydrogen economy”.

Get the Data on Wilton International